Sailing south to the Cape of Good Hope

We waited in Durban for an ideal weather window to head south and it finally came on December 19, 2002. A large high-pressure system was over much of South Africa and along the coast and northeasterly winds were predicted, so we set sail at 5 am from Durban toward New London. The seas were rather large (2-3 m), but the wind had indeed shifted east and was going northeast. We went offshore about 15 nm to find the Agulhas current to get a southerly flowing assist and hoped to make the 255 nm to East London. With the current and good wind (~20 kts) we made it to East London in no time and kept going. Galatea was screaming down the coast at 11 knots. The next port we considered was Port Elizabeth (134 nm past East London) and the conditions stayed ideal and we sailed past Port Elizabeth and rounded the corner of the African continent and headed west to Cape St. Francis. The weather was still favorable and we decided to keep on going so we passed St. Francis, Knysna, and finally Mossel Bay (175 nm past Port Elizabeth). The forecast for getting around Cape Agulhas (the furthest point South on the African continent, and another 125 nm away) was fair. The wind was going to shift to the southwest, but a mild SW’er was predicted for 15-20 knots. We decided to “go for it” and kept sailing around the cape until we rounded the cape in fog as thick as pea soup. Thank goodness for our radar because it allowed us to navigate and identify the many commercial tankers and freighters also headed around the coast. A few got well within our comfort range passing us within 0.5 nm and 0.75 nm – quite a menacing sight to see a huge supertanker emerge out of the fog only a half a mile to starboard. The SW came and then went W and finally NW, so we had to motor with full sails up tacking into the NW our final 100 nm to make it in to Simon’s Town. We probably set the record for cruising boats this season making it from Durban to Simon’s Town in 4 days, 17 hours nonstop (23 December 2002). We knew just how fortunate we were to have such a wonderful trip around the tip of Africa!

Gui reefing the main (in full weather gear) A close encounter with a container ship.

We were met in Simon’s Town at the False Bay Yacht Club by John Cluister and Desiree, wonderful friends from South Africa, who recommended stopping in Simon’s Town before heading to Cape Town. They were right; this is a beautiful, quaint village with a pristine harbor including daily visits by the resident seals. John is currently sailing around the world on s/v ‘Green on Blue’ and we met him in the Marquesas back in April. We enjoyed the most wonderful Christmas with John and Des at Des’ sister’s (Shirlee and Rick) house for Christmas. They have vineyards and olive trees in the rustic, mountainous setting close to Robertson in the Western Cape province. We enjoyed marvelous food, socializing, relaxing and hiking to see some Bushmen paintings. 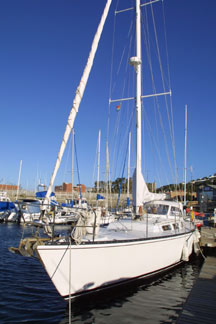 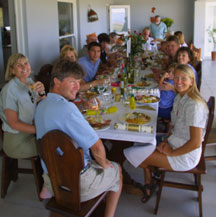 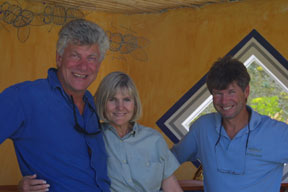 The fun continued in Cape Town with the arrival of friends from Boston. Tienie van Schoor and his family came home to South Africa for the holidays and paid us a visit on Galatea. Bea and Steve Brittan and Normand Mayville flew in to Cape Town for a few weeks of R&R and to visit with Steve's parents Philip and Dolly Brittan. We had a magnificent time in Cape Town, the wine country, and Simon’s Town with all our friends. We celebrated New Year’s Eve and escorted in 2003 in style with a braai and much bubbly at the Cape Town house they had rented in the Gardens. We also met up with Jean Yves and Christine (s/v Solo) again after meeting them in Mauritius and spent a wonderful day touring the Cape peninsula park and smiling at African penguins. 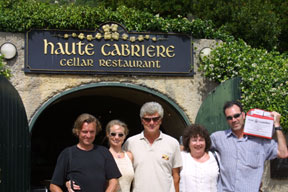 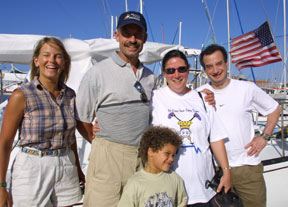 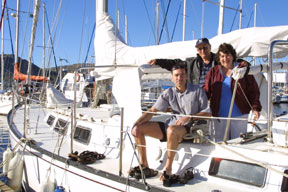 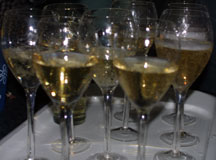 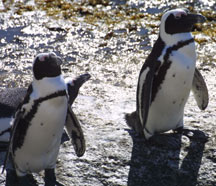 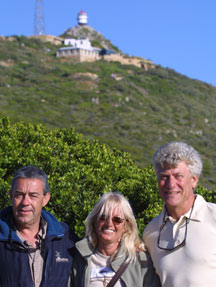 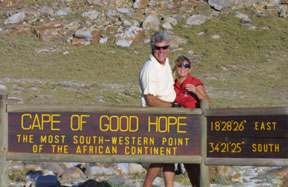 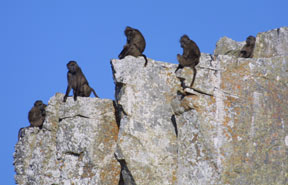